The Balkan festival is more than a special event with its folklore and traditions. It is an event where youth and elders gather together. Balkan fest is an annual event which took place, this year, in Thessaloniki, between 16-17th of February and it attracted many local people and city guests. According to the organizers, this year, the festival lasted longer and also offered more diverse music bands than before.

Like most of the festivals, it was also split up in two days. The festival surprised us more than we expected. The people have gone wild every time the sound of clarinet permeates into the air. Girls and boys started to jump up and down and stomp the beat like clockwork toys all around the dance floor. Indeed, we have the proof that the Balkan rhythm with gypsy spices is in their blood. 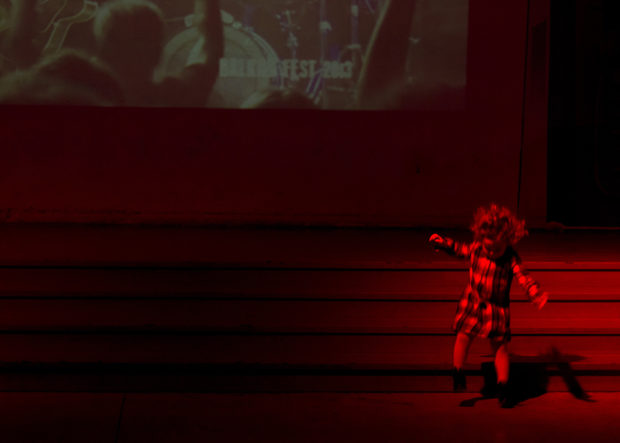 ‘As a citizen of a country that makes up the Balkans, I was so pleased to find out that in the first weekend I moved to Thessaloniki there was a Balkan festival. I was always attracted to the idea of making a comparison between the culture of the Balkan Countries and to find out how they differ one from another. In terms of music, fun and people I can say Romania and Greece resembles a lot. I was thrilled to see the dynamism in people eyes, the energy of the people dancing the traditional Balkan hora or oro, the joy of the singers, the good vibe of the festival, all combined resulted as an authentic Balkan Festival.’

‘I enjoyed so much to see that even if most of the bands were Greek bands, the music in between the bands was for sure diversified so that it would be from all the Balkan countries. I was impressed when I heard some Romanian songs and I was happy to see that the people were dancing on this traditional Romanian songs.  That was the moment I realized that the Balkan Fest 2018 was not just about the genre of music (Ska, Balkan, Folk etc.), it was also an authentic Balkan experience that gathered music, artists, people and moments, all together.’

‘The real heat was reached to the maximum on the second day of festival. And there is only one band that made us feel like in the sauna – Greek band, Koza Mostra. The band is formed by 6 members, active from 2011. Musicians are not afraid to mix many music styles together like punk, rock, ska and traditional greek folk music. I was amazed about the ability of the band leader ,Illias Kozas, to control the audience. The most memorable scene was when Illias asked the audience to split up in two groups. People suddenly divided and kept teasing opposite site shouting and waving their hand. After the command given by the band leader both groups  immediately ran to each other and began poging. It postponed my mind in those times when I was 15 years old, when punk movement was still alive in Lithuania, in those times when pogo dance allowed to feel you the taste of rebellion.’

‘According to many media sources the pogo dance was invented in Great Britain in the late 70s. It doesn’t make any difference if it was influenced by The Sex Pistols or The Slits, the dance itself represents independence and freedom. Jump up and down, be jostled by the crowd and don’t warry to jostle somebody else or grab a stranger for a pick up dance. Gentle folk traditions connected with western pogo movements release hidden human feelings in each of us that was at Balkan Fest 2018.

I am 25 years old, I recently graduated pharmacy and right now I am finding my way through life. I always thought that I want to do more in life than just to become a pharmacist. This is the reason why right now I am here, in Greece (Thessaloniki), doing an EVS, trying to see if my interest for photography and videography is a passion, a hobby or just something I imagine I love.

Thessaloniki says no to Fascism

Safe sex and stigma in Thessaloniki

This site uses Akismet to reduce spam. Learn how your comment data is processed.

France, TOP 6 of its most beautiful natural settings! (Chapter 1)

Thessaloniki says no to Fascism

Last episode of our beloved colleague Wali 😔Random Radio Show is losing another important member of the team. We will evaluate the Wali's EVS experience and listen to his favourite music. Join us 😉